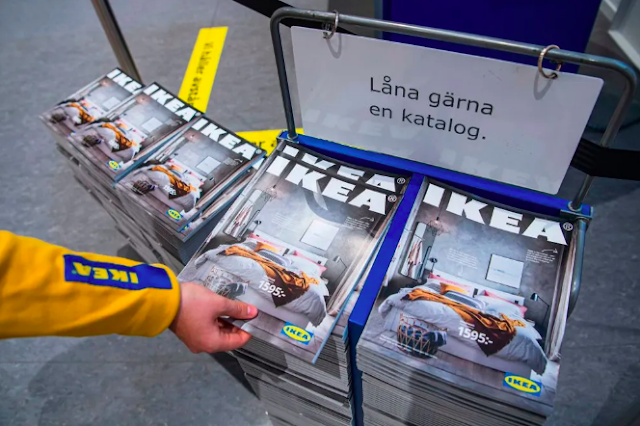 From Morning Brew on Dec. 8:

While Nicolas Sparks is proof that books can make you cry, turns out catalogs can bring on the waterworks, too. Yesterday, Ikea made the "emotional but rational" decision to discontinue its iconic furniture catalog after a 70-year run.

The backstory: A mainstay of coffee tables everywhere, the notoriously thick lookbook is said to be the most widely distributed publication in the world—even more than the Bible. At its peak, Ikea produced 200 million copies in 32 different languages.

But the Bible doesn't compete with e-commerce. Online sales (up 45% last year) have become increasingly important to Ikea's business, and customers just weren't using the paper catalog as much as they used to.

Bottom line: Online furniture sales have been a pandemic winner for retailers like Wayfair and Amazon, so Ikea's decision to focus on its digital operations makes business sense. Just don't get rid of the meatballs.

+ While we're here: If you're feeling nostalgic, visit the digital Ikea museum to leaf through decades of past catalog issues.
Previously,
Vintage Ikea (August 2020)
TV Living Rooms as Ikea Ads (June 2019)
How to identify an original Ikea Frakta bag (April 2017)
Posted by Eric at 12:28 PM