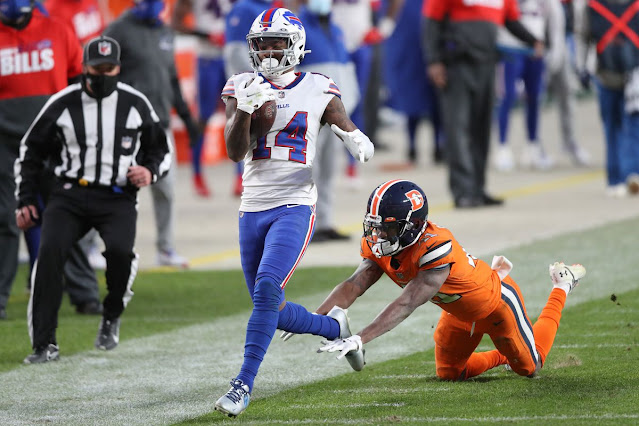 "In the days after the deal was announced, Diggs found himself wanting to do so much: talk to his new coaches, look at his new playbooks, meet his new receiving corps and, more than anything, get to know his new quarterback. The only problem was that a pandemic had just enveloped the world.

There would be no OTAs. No minicamps. No official team activities of any kind. And Diggs couldn't just hop on a plane and show up to hang out with Allen either. He had to get creative.

Diggs' brother, Trevon, who plays cornerback for the Dallas Cowboys, had been really into video games for a while and was always asking Diggs to play. Diggs never was all that interested, and he admits he would even mock Trevon and others for the gear they used. "Like, 'Oh, you got a headset on? You too serious about it,'" he says, laughing.

Only then Diggs learned that Allen was a gamer. And he got a headset of his own.

The game that Diggs and Allen played together, Call of Duty: Warzone, is pretty much what you'd imagine: a mission-based game with lots of weapons, artillery and shooting. Diggs, as a relative novice, spent a lot of time dying (or being "downed," to use the vernacular), but that actually turned out to be a good thing.

While most players simply fight on if someone they know is downed, Allen always retreated from whatever battle he was in -- even if he had an advantage -- to run over to Diggs' avatar and resuscitate him.

"It didn't matter if I was getting shot or not," Allen says. "I was going to revive my guy."

Allen's commitment to helping Diggs ran so deep it infuriated Trevon, who sometimes played with them. Turns out Allen's caring approach to his new receiver isn't the ideal strategy for others playing in the game who might have been counting on Allen to, say, spray a hail of bullets at a passing ATV.

"I had to stop playing with them," Trevon says. "It was getting ridiculous."

Diggs and Allen spent hours on the game, talking to each other on their headsets and bonding over their repeated attempts to dominate whichever console heroes tried to obliterate them on that particular day.

When the two finally met face to face at the Miami workout, Diggs felt like they weren't starting from scratch.

Trevon, who was staying with Stefon in Florida, giggles when he recalls how excited his brother was about Allen after getting back home from the first in-person session with his new internet buddy.