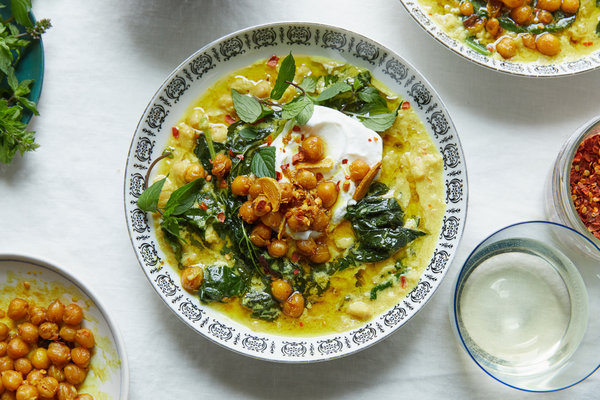 "Roman, after all, is arguably the most fashionable avatar of a broader shift. We are living in the age of the global pantry, when a succession of food media-approved, often white figures have made an array of international ingredients approachable and even desirable to the North American mainstream — the same mainstream that, a decade ago, would have labeled these foods as obscure at best and off-putting at worst. This phenomenon is why you now see dukkah on avocado toast, kimchi in grain bowls, and sambal served with fried Brussels sprouts. It’s a kind of polyglot internationalism presented under the New American umbrella, with the techniques and raw materials of non-Western cuisines used to wake up the staid, predictable flavors of familiar Americana.

Not long ago, you could see this playing out on the menus of hip restaurants across the country. At AL’s Place in San Francisco, squash tahini was served with burrata, sumac-galangal dressing, pickles, and dukkah; in LA, there was preserved Meyer lemon and lacto-fermented hot sauce in Sqirl’s sorrel pesto rice bowl, and a “Turkish-ish” breakfast of vegetables, a sumac- and Aleppo pepper-dusted egg, and three-day-fermented labneh at Kismet. Over in Nashville, Cafe Roze put a turmeric egg in its hard-boiled BLT and miso ranch in its barley salad. Up in New York, Dimes served a veggie burger with harissa tofu and a dish called huevos Kathmandu that paired green chutney and spiced chickpeas with fried eggs.

But now, as the COVID-19 pandemic has forced most of us to stay home and make the most of our kitchen skills, the global pantry is most visible on the pages and websites of establishment food media. It’s Bon Appétit’s gluten-free coconut-turmeric pie and kimchi-cream cheese toast; Food & Wine’s tofu masala and rosy harissa chicken; the New York Times’s brothy chicken soup with hominy and poblano; and Every Day With Rachael Ray’s minty matcha smoothie and Korean barbecue burgers. You can see it all over social media and particularly Instagram, where its most viral example is #thestew, Roman’s 2018 recipe for a chickpea-coconut milk stew whose broth is made golden with turmeric. And you can see it on Bon Appétit’s extremely popular YouTube channel, where its test kitchen stars make everything from saffron brittle to “dahi toast” to slow-roast gochujang chicken to spicy chicken katsu sandwiches (though it bears noting that the first two of those recipes were created by people of color).

As the culinary has become a marker of contemporary culture, occupying much of the space once monopolized by music or fashion, food media and social media have fused to create a supercharged form of aspirational desire. Within this mode of desire, however, the idea of using new, hitherto “exotic” ingredients only seems to become aspirational when those ingredients appear on the pages of prominent tastemaking magazines (or, perhaps more relevantly, on Instagram) — or are espoused by white tastemakers. Remember that time in 2018 when the author Stephanie Danler told T Magazine about her “kitchari cleanse,” explaining how the Indian dish of lentils and rice (actually called khichrhi) allowed her to “reset [her] system”? Or the time that haldi doodh took over coffee shop menus, the food media, and Instagram after being rebranded as the turmeric latte? "
Posted by Eric at 12:20 PM