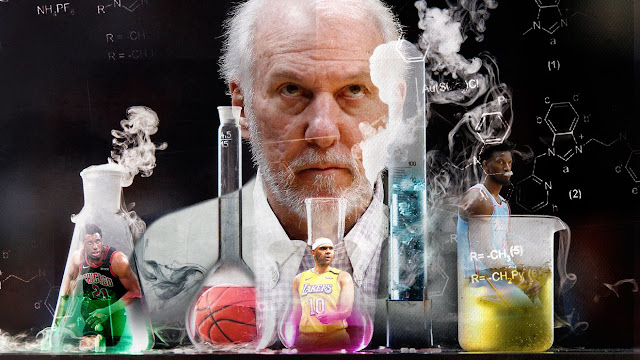 SB Nation – "The NBA has a chemistry problem"
By Michael Pina

Bill Russell once wrote, “There is no time in basketball to think: ‘This has happened; this is what I must do next.’ In the amount of time it takes to think through that semicolon, it is already too late.”

It’s an intuitive idea: The longer we’re around people, the better we know how they’re going to behave under certain circumstances. Just think of the short-hand forms of communication you’ve established with your closest friends, family members and coworkers. Those subtle gestures and glances are especially helpful in sports, where a split-second miscommunication can be the difference between winning and losing.

“You go back to those San Antonio days, the winks and blinks and the nuances [where Tim] Duncan would find Tony [Parker] on a backdoor, or Manu [Ginobili] would find Timmy on a lob, that evolved over time, and lots of times [time] isn’t afforded,” said Philadelphia 76ers head coach Brett Brown, who spent nine years as a Spurs assistant. “You need time to have that sophisticated camaraderie, gut feel, instances on a court that require split the moment decisions.”

Continuity by itself doesn’t lead to winning, of course. In some cases, it might only extend mediocrity. And if winning a championship is an organization’s goal, then it should first pursue star power. But continuity is a boon to coaches, who can implement more complex strategies if they’re able to retain a core group of players year after year. "
Posted by Eric at 1:56 PM