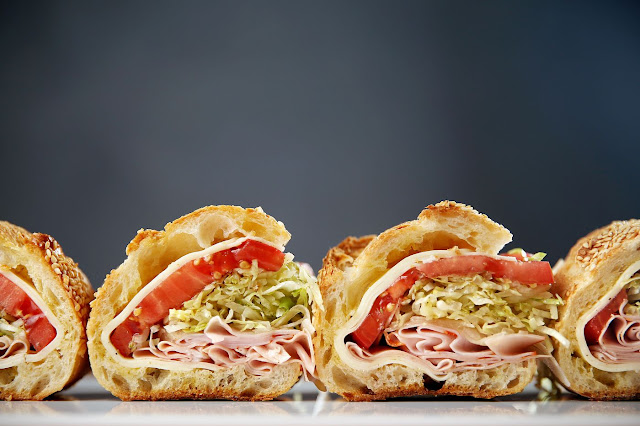 From GQ's to-be-published-online "Best New Restaurants in America 2020" by Brett Martin:
"When I think of the last days of the old ways, the months last winter that I traveled the country in an attempt to see America through the lens of its new restaurants and name the best of them, four words stick in my mind. They linger at the edge of my consciousness, float to the fore at unexpected moments, whispering like a distant melody or a koan—or an elegy. The words are these: Private Hoagie Omakase Room. Such a room actually exists, or at least existed. It is officially the Hoagie Room, in Philadelphia's justly acclaimed Pizzeria Beddia. I myself did not dine in the Private Hoagie Omakase Room, not having the requisite five to seven friends on hand in the City of Brotherly Love prepared to pay $75 each, before tax, tip or beverage (beyond a welcome cocktail), for a "two-hour private pizza and hoagie Omakase experience." I did see the door, an anonymous blond-wood portal disguised to look like an office or an employee dressing room. Seems like the Esquire food critic was in there.

So I can really only consider the Private Hoagie Omakase Room as an abstraction, or a set of words. (Would Po'boy Prix Fixe or Grand Buffet du Grinder have the same power? I think not.)"

"My friends and I were already on board with trying the “hoagie omakase” in the private room tucked into a corner of Fishtown’s nationally touted Pizzeria Beddia. Unlike a traditional omakase — the Japanese term for a menu chosen by the chef — this sounded like a mashup of high- and lowbrow, of Japanese elegance and Philly swagger, plus a lot of hype.

It’s the kind of absurd idea that could only be pulled off by Beddia, who has built a cult-like following as a pizza chef and a tastemaker, and who is the creative engine behind one of the hottest new restaurants in the country.

The experience costs more than a regular dinner at Beddia, where pies run about $25 and most appetizers are $12 or less. Booking the Hoagie Room costs $75 a person — excluding tip and including only one round of drinks. But hoagies are just the hook; the price includes small plates, soft-serve ice cream, and four pizzas. It’s a way to try the restaurant’s entire menu, plus three truly excellent sandwiches that you can’t get anywhere else."
Posted by Eric at 1:49 PM