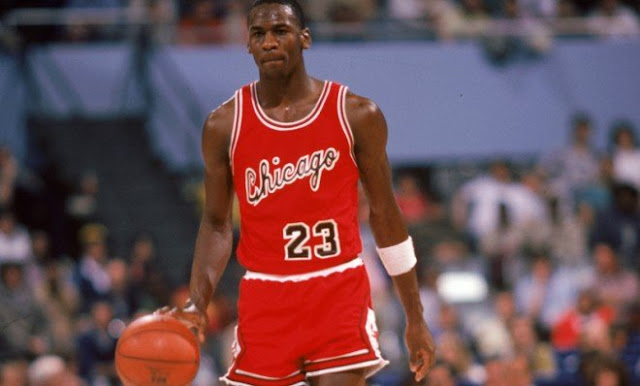 ESPN – "Michael Jordan: A History of Flight"
By Wright Thompson

"His dad said that Nike's commitment was on display because Phil Knight had waited so long, and its design skills were on display in the IIIs, and that this seemed like the right move for his future. Michael listened. That's where the legend began -- with North Carolina exerting its pull outside an Orange County hotel. From that parking lot to recognition from the president, not just of his athletic prowess, or his marketing savvy, but of his drive, his competitiveness, his essential greatness. It could be seen as a culmination of a life spent escaping a past, or a post-racial brand strategy anomaly, an American unicorn, or it could be seen in another way: a man actually fulfilling a destiny, carrying his family with him on his rise, coming from somewhere. Michael Jordan didn't just appear. He was raised -- by his parents, by a community, by the stories of those who came before.

There's a version online I've been playing over and over, from Game 4 of the 1998 Finals. The crowd is as loud as the big arena speakers. The top comment on the video says, "Karl Malone hears this in his nightmares." It's thrilling even all these years later. After Clay announces the fourth starter, Ron Harper, the crowd gets louder -- because he's also 6-foot-6. They know what's coming. Every child of the 1990s can almost recite Clay's next words by heart, how he says Jordan's home like he's talking about Sparta or something: FROM NORTH CAROLINA ... That signifies many worlds. Not just North Carolina but coastal Carolina, always different than the mountains or the Piedmont plain; and not just coastal Carolina but Wilmington, and not just Wilmington but the rural riverbank swamps stretching out from the edge of town. And not just generic swamps but two in particular. Holly Shelter and Angola Bay. That's where the Jordans come from. A tight wedge of brackish land outside Wilmington bordered by Highways 17 and 24 to the south and north, and Highways 117 and 50 to the west and east. Keep drilling down, before names and roads and any of that, go all the way back, because these 560 square miles of land tell you as much about the man as a story about being cut from a basketball team ever did. "There is a lot of power in staying connected," says Zandria Robinson, a Georgetown professor studying race, gender, popular culture and the U.S. South. "There is power in that particular kind of rearing too -- all that work. This is why they stayed connected to that land."

Long before Michael Jordan came into the world, this is where he was born.

They told Michael to turn all negative events into positives, which later became his armor made of slights. Michael's mother wrote children's books after he got famous, and in one of them, her parenting philosophy was revealed: Saying you want something is fine and well, a good start, but doing something about it is what really counts. At the end of that book, when the mother puts her son to bed after his first successful basketball game, she tells him with pride, "I guess you aren't just a dreamer but a doer, Michael." "
Posted by Eric at 3:01 PM