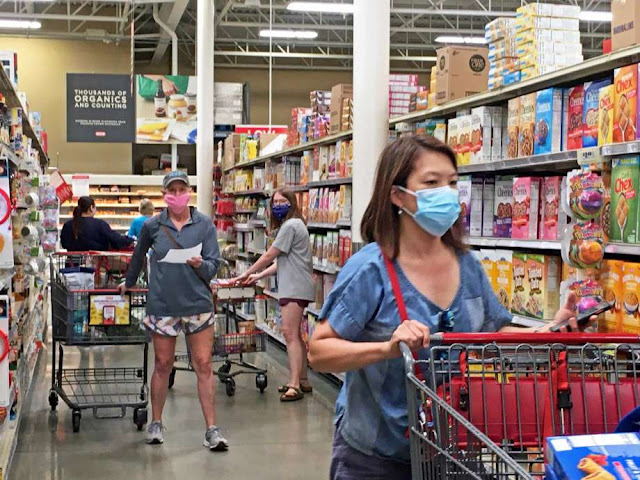 Quartz - "In March, Americans shopped at the grocery store like it was 1996"

"In March 2020, almost 63% of food and drink bought by US consumers was purchased at stores. This was the highest share since January 1996, according to data from the US Census.

The share of food spending at restaurants and bars (including takeout) has been slowly rising for for over half a century. In 1970, only about one quarter of US household expenditures were spent on eating out. By the beginning of 2020, that number had reached about 50%. The Great Recession slowed down the move to eating out from 2008 to 2012, as researchers at the Federal Reserve Bank of St. Louis noted, but only a pandemic could truly reverse the trend.

One, groceries are cheap. The rise of large chain grocery stores, like Walmart, and increasingly efficient agriculture and food production technology drove food prices down (particularly for prepackaged foods). At the same time, eating out has continued to get more expensive, since labor is a much larger share of costs for restaurants than supermarkets, which is not getting any cheaper.

Two, as an increasing number of women have entered the labor force, there is no longer a member of the home expected to cook (when a member of a heterosexual couple does cook, it is more likely to be the woman). People have turned to eating out or ordering in for convenience, and the ability to spend their time on work or leisure. Currently, due to shelter-at-home orders, people both have more time to spend on cooking and may be worried about the health consequences of ordering in. "
Posted by Eric at 11:51 AM